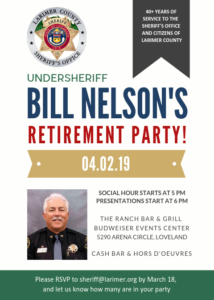 After serving 2 years as a deputy sheriff in Laramie County (Cheyenne) Wyoming, Bill Nelson began his career with the Larimer County Sheriff’s Office in 1979. Bill began as a patrol deputy, but also worked as a criminal investigator. However, once it was discovered that Bill had experience in climbing and wildland firefighter, he was temporarily assigned to emergency services unit, which managed search and rescue, dive rescue and wildland firefighting operations.

For most of the next 20 years, Bill served in line, supervisory and command positions in emergency services, modernizing equipment, training and processes. Over that time, Bill became known around the state and region for his expertise in fire and rescue operations.

When the KUSA Channel  9 helicopter crashed through a frozen Horsetooth Reservoir in 1992, Bill participated in the rescue response as well as the recovery dives through the ice. In 1996, Bill earned the Medal of Valor for his actions during the Spring Creek Flood, which cost the lives of 5 persons.

With the changing of sheriffs, in 2011, Bill was appointed as the undersheriff – the role he has served in for the last 8 years. During that time, Larimer County experienced the most devastating recorded wildfires in the county’s history throughout 2012. These unprecedented disasters were followed up by the record setting flash floods of September 2013. Throughout those critical incidents, Bill demonstrated outstanding leadership and management skills. 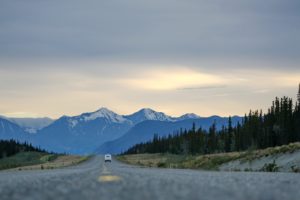 After 40 years of service, Bill is choosing to retire in April of 2019, trading in his firearm, badge and firefighting gear for outdoor gear and adventures. Bill plans to “begin” retirement with a summer road trip up the Al-Can Highway to Alaska.

The Rocky Mountain Chapter extends its heartiest congratulations and warm wishes for a fulfilling and exciting retirement! Good luck, Bill, we hope you make all your dreams come true!