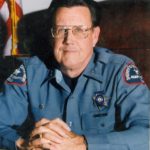 He received his bachelor’s degree in police science and administration from Cal State Los Angeles and his master’s degree in public administration from University of Southern California. Bill enlisted in the United States Marine Corps in 1957 serving with the Seagoing Marines and as a Military Policeman. Bill completed his tour of duty with an honorable discharge in 1961. Immediately following, Bill joined the Los Angeles Police Department and enjoyed a very successful 20 year career, retiring at the rank of Captain. The Shearer family moved to Colorado in 1981 when Bill was appointed as the Chief of Police for the City of Montrose. Bill graduated from the FBI National Academy Class 136 in 1984. In 1987, Bill accepted the position of Division Chief for the new administration of the Adams County Sheriff’s Office. In 1994, Bill was elected as the Sheriff of Adams County and served two full terms, beginning in 1995 and retiring in 2003.

Bill continued as an adjunct professor for over 10 years, imparting his years of wisdom and experience to hundreds of criminal justice students. Bill’s heart and passion for law enforcement never wavered. In addition to his professional career his love of horses was evident from childhood throughout his entire life. Bill’s strong faith carried him through the challenges in life, especially at his time of death.